By the 1830s, Charleston was losing its economic clout and becoming more deeply enmeshed in sectional struggles over slavery, tariffs, and states’ rights. … [more | map]

By the 1830s, Charleston was losing its economic clout and becoming more deeply enmeshed in sectional struggles over slavery, tariffs, and states’ rights.

Economic recessions lowered the prices of South Carolina’s most important crops, rice and cotton, while tariffs on manufactured goods favored the North at the expense of the South. New modes of navigation meant transatlantic ships no longer depended on trade winds that favored the West Indies and Charleston. In 1825, the completion of the Erie Canal brought produce from the opening West to New York City. While Charleston still boasted the largest Jewish population in North America in 1820—600 Jews, or close to five percent of the white population—New York was quickly gaining ground.

Even as Charleston’s Jewish demographic dominance declined, the city’s Jews stood out for their high level of social integration and for their pioneering public struggles over the direction of American Judaism. Older conflicts between Sephardic and Ashkenazi factions were transformed in this era into fights over religious reform, which twice divided Kahal Kadosh Beth Elohim and its member families. In 1824, the Convention of Israelites, a group of forty-seven mostly young men, wrote a petition to the adjunta calling for a variety of changes, including English-language sermons and an abbreviated service. When their petition was denied, they founded the Reformed Society of Israelites, the first organized effort to modernize Judaism in the United States. German Jews had been advocating for religious reform in cities like Hamburg and Berlin for some time, but Charleston’s Reformed Society was largely homegrown. Led by Isaac Harby, David Nunes Carvalho, and Abraham Moïse II, among others, and influenced by its own cosmopolitan intellectual milieu, the group had the distinction of producing the first reform prayer book in the world.

The society met separately for some eight years, and over time most of its members rejoined KKBE. The reformers’ day would come in 1840, now with the support of the congregation’s new minister, Gustavus Poznanski. In 1838, a devastating fire had destroyed the synagogue and surrounding neighborhood. While the new sanctuary was under construction, thirty-eight members requested a meeting “to consider the Propriety of erecting an Organ in the Synagogue.” A vocal minority saw this as a violation of Jewish law and the congregational constitution and took measures to turn back the tide. When the traditionalists lost the vote—the resolution to introduce an organ passed forty-six to forty–the minority withdrew and organized a new congregation, Shearit Israel.

The conflict did not end there, but found its way to the secular courts. In State ex relatione A. Ottolengui, v. GV Ancker, et al., the judge refused to consider evidence from Jewish law and the jury decided in favor of the pro-organ faction. Orthodox Shearit Israel petitioned for incorporation in November 1846, and the following February laid the foundations for a new synagogue on Wentworth Street. Within a few years a third congregation, Berith Shalome (later Brith Sholom) was organized in Charleston by Yiddish-speaking immigrants from eastern and central Europe, who were uncomfortable with both the Sephardic orientation of Shearit Israel and the Anglicized service of Beth Elohim. 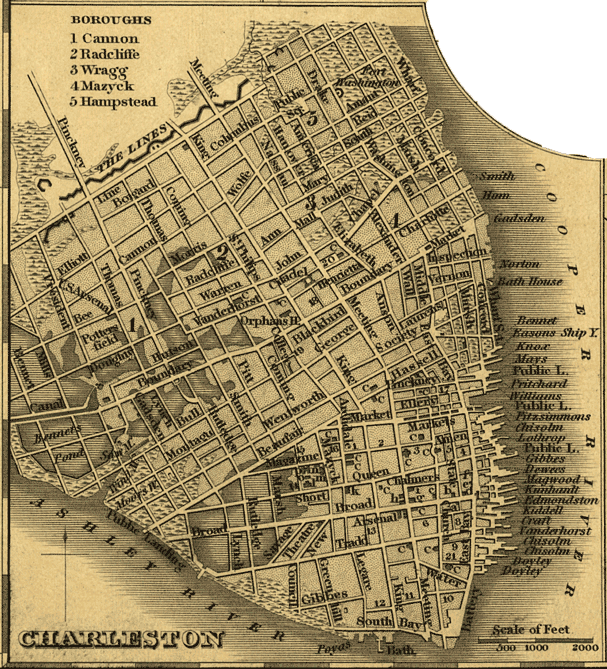 Circa 1833
Henry Schenk Tanner’s Map of Charleston, South Carolina, published in 1833. Courtesy of the Library of Congress.

Corner of Meeting and Hasell Streets
Benjamin A. Rodriguez